Often seen as a side hustle, skilled women quilters in Karnataka keep their heritage alive by upcycling colourful scraps of fabric into beautiful patchwork quilts, earning financial stability in the process.

Wabi-sabi, the Japanese philosophy of beauty in asymmetry, would best describe the loud and colourful welcome you receive at the quilter village of Jantli Sirur in Karnataka’s Mundargi taluka (sub-distrct).

A bright sunflower crop, music from cone-shaped loudspeakers rigged to poles, groups of men and boys in their best whites and tricolour angavastra bustling about in the lanes — the colours and sounds whip up a psychedelic effect. And yet there’s something comforting about it, like the khowdis (quilts) the women of Jantli Sirur make.

“It’s the last day of shravana and they are preparing for the penultimate day of Basavanna jatra,” Kiran said.

Kiran, a man in his forties, travels 65km every fortnight to deliver sacks full of discarded cloth pieces from tailors to 30-odd women quilters of the village.

The table runners and patchwork quilts they turn the old cloth into are as lively as their late August festival. There are khowdis everywhere: hanging on clotheslines, rolled out on beds, spread out on tractors. 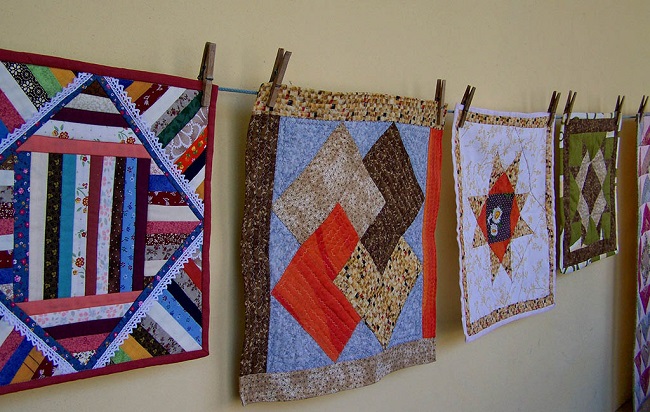 Jindli Sirur is among 58 villages of Mundargi taluka, located 18km from Dambal, the site of Kalyani Chalukya archaeological remnants. Agriculture is the main occupation, but farm yields have been inconsistent lately because, like farm economies around the world, this village too isn’t impervious to changes wrought by climate change. Drought has hit the village hard and the absence of irrigation canals has made things worse.

When life gives you scraps, make a quilt

And the womenfolk of villages in northern Karnataka are very good at that. Armed with sewing skills passed down generations, they make khowdis with an abandon of colour and composition.

The way they make it is actually a sight to behold. It’s upcyling at its best.

Each piece we make is one-of-a-kind and has a unique story to tell. Each colourfully patched quilt is a reflection of the woman who sewed it.

The cloth pieces are cut into neat geometrical shapes to create the unique patchwork pattern of quilts. The base fabric is smoothened and then the cut pieces are stitched one by one onto it with neat stitches. Fine, running stitches are worked across each fragment.

“I have been making them for as long as I can remember. Each piece we make is one-of-a-kind and has a unique story to tell. Each colourfully patched quilt is a reflection of the woman who sewed it,” said Andhamma Koni, 60, a third-generation khowdi maker and gram panchayat official.

A stitch in time

The village has been making quilts for over 150 years and more than 200 families are into quilting.

Where do they (the younger generation) have patience and time for such a craft?

“We prospered because of our inborn expertise in sewing and also for the better material we use,” said Andhamma. 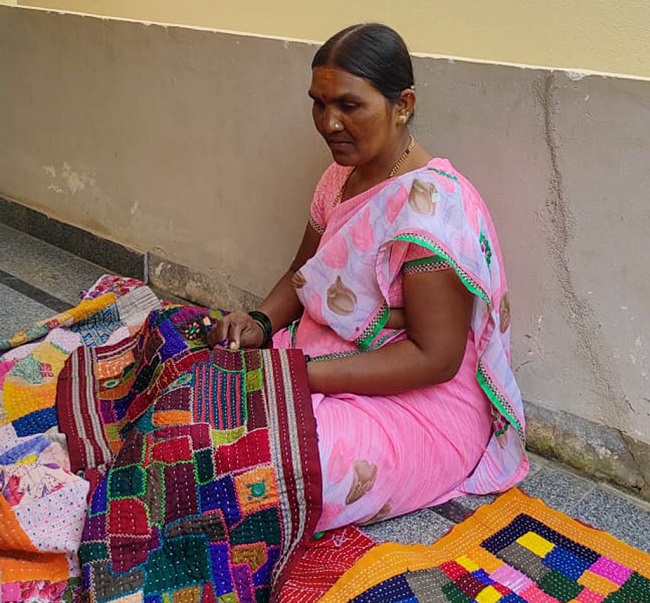 Others put their skin in the game too, but many wilt out in the long run.

“Where do they have patience and time for such a craft?” Paramma Alvandi, 55, answered it with a question.

Patchwork is patience – loads of it

It’s time-consuming, especially when there are 60-70 cloth fragments of different sizes, shapes and textures. Then there are the ones with just a couple of patches spread geometrically.

The women assemble and sew simple, practical quilts. The edges are basted to secure the entire assembly. Then each khowdi is quilted with a long, running stitch.

The thread—locally known as noolu daara for the long stitches – is sourced from Mumbai. It costs Rs 350 a kg and is quite strong, able to withstand the rough and tumble a quilt may be subjected to. Nearly half a kilo of thread goes into one quilt. 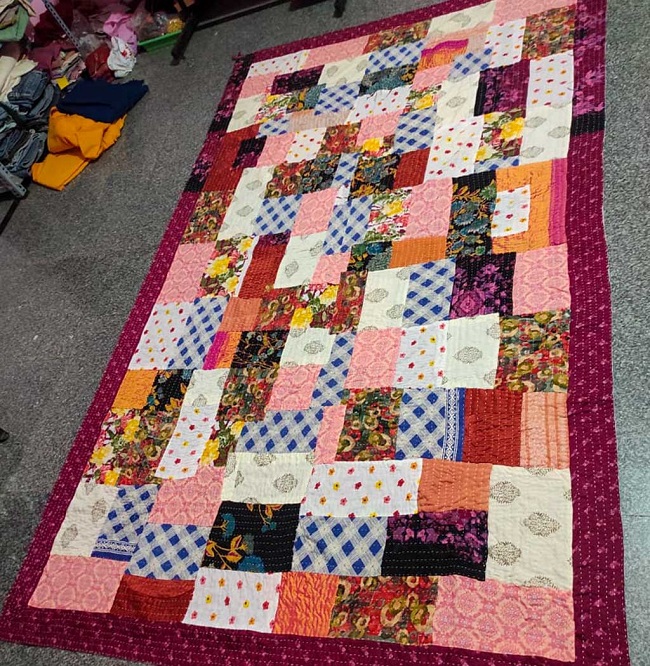 With layers of appliqué squares, corner chevron, tassels, and point-to-point squares that form lines and other shapes, the patterns create an added dimension of depth and give the quilt a playful quality.

The quilts bring good money, but villagers of Jindli Sirur still consider quilting something in between a leisure activity and a livelihood, never a primary source of income.

“We do most of the sewing in the afternoon after finishing our household work and resume after dinner,” said Nirmala Navalgund, a 45-year-old seasoned quilter of over two decades.

Their khowdis have patrons in cities like Bengaluru, Chennai and Mumbai—where people mostly use them as comforters.

Each quilter makes one or two a month and earns between Rs 1,500 and Rs 2,000. Business booms in winter. Naturally.

Tourists drawn to the patchwork

People from far and near like the town of Gadag, 22km away, visit the village.

But these visits came down to a trickle in these two years of the pandemic. 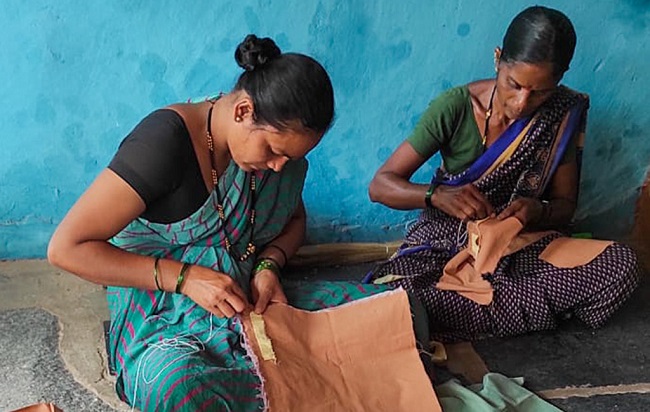 “During the pandemic months, orders dried up and we could provide jobs to only a handful. Things are picking up now,” said Rabi Kiran of Nandi Arts.

A fine arts teacher, he moved to Huvina Hadagli in Vijayanagara after marriage and got hooked to the khowdis of Jindli Sirur in 2015 after a classmate introduced them to him.

Like khowdis of Karnataka, almost every state in India has its own version of hand-made bed coverings.

The kantha of West Bengal; ledra and gudri of Jharkhand with their dynamic designs derived from folk art and rock art; konthas of Odisha; kanduri of Bahraich in Uttar Pradesh, Jaipuri razai of Rajasthan; godal of Madhya Pradesh; godhadi, maanes and kapilae of Goa; sujani of Bihar with figurative designs illustrating everyday life of women who make them; and sujani of Bharuch in Gujarat with wadding inserted into double-weave pockets on the loom.

They stitch together a big part of India’s cultural history. And each one is like a friend, a great source of comfort.

This article first appeared on Village Square, and is part of a series to highlight inspiring stories about the youth of rural India in the South.Read the original article.